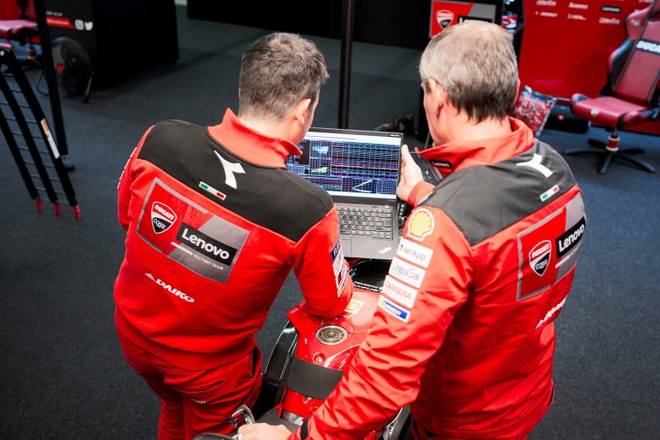 The rapid and relentless evolution of the world of motorsport has pushed Ducati Corse to seek reliable partners to support their activities on the track, to obtain a competitive advantage over the opponents not only from the point of view of performance on the track. In an increasingly digital and technological era, in which design efficiency, attention to budgets and sustainability represent insurmountable mantras, the need for a more efficient and integrated drive on the IT side soon emerged. Data processing and analysis, the major computational power at the service of virtual development, represent key aspects in the world of MotoGPcompetition for which Ducati Corse since 2018 benefited from the integrated support of Lenovoglobal leader in the digital and software world. 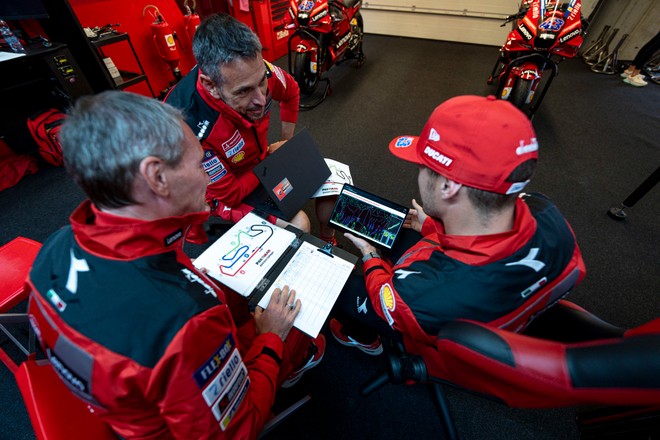 We realized that it was no longer enough to create the most powerful engine or select the most talented drivers: technology was now a decisive element for the success of a team. For this reason we sought a leading technological partner in its sector able to maximize the best technologies available on the market to meet all our needs, both on the track and in the company, 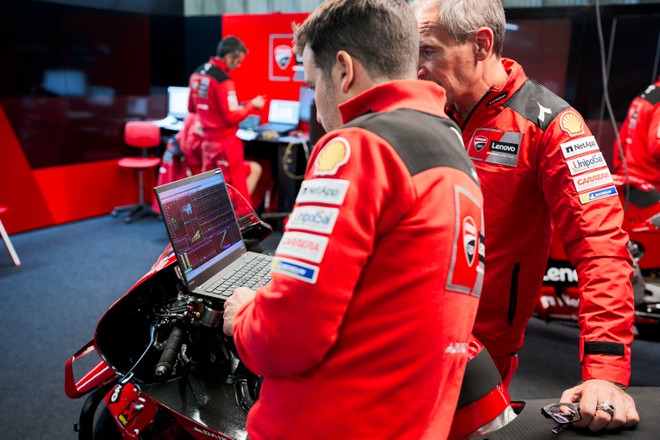 On the occasion of the eighth stage of the MotoGP Championship, held on the famous Mugello circuit over the weekend from 27 to 29 May, we were guests of Lenovo and Ducati Corse to experience the world championship up close by talking to those who work every day. and leverages Lenovo hardware and software to improve track performance.

Lara Rodini, Global Sponsorships and activation Director Lenovoexplained how the project with Ducati, since its inception in 2018, has not been configured to limit itself to a simpler supply of technological devices as much as an integrated collaboration to meet the needs of the Ducati team in MotoGP.

Lenovo follows and supports all Ducati Corse activities in the world of MotoGP, from design to virtual simulations, from data analysis to the set-up of the motorcycles on the track […] The common approach to the search for innovation has allowed us to collaborate closely, creating synergies that we never would have imagined. 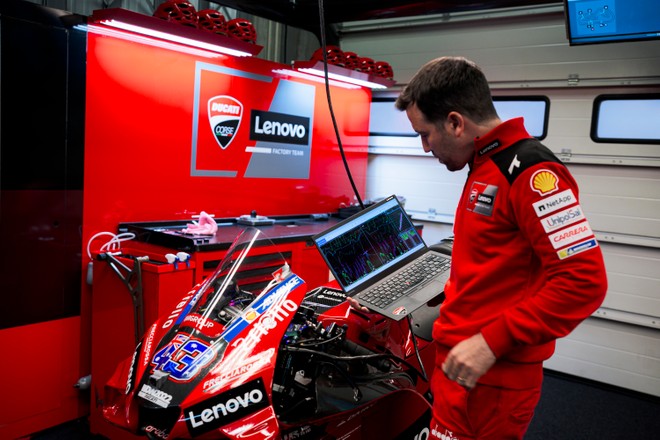 The relationship with Lenovo soon proved to be a strategic partnership, allowing us to reach new levels of innovation, and paving the way for a new way of conceiving and designing motorcycles. We have thus managed to improve in terms of power, speed (in the order of tenths of a second per lap) and safety of our bikes in order to win the Constructors’ title in 2020..

From here we arrived at a deeper integration between the two realities which led to the signing of an agreement at the beginning of 2021 to rename the MotoGP team with the name of Ducati Lenovo Teaminserting the logo of the company, which became Title Partner Ducati Corse, in plain sight on the livery of the motorcycles, uniforms and in the emblem of the team itself.

THE DEVICES USED BY THE TEAM 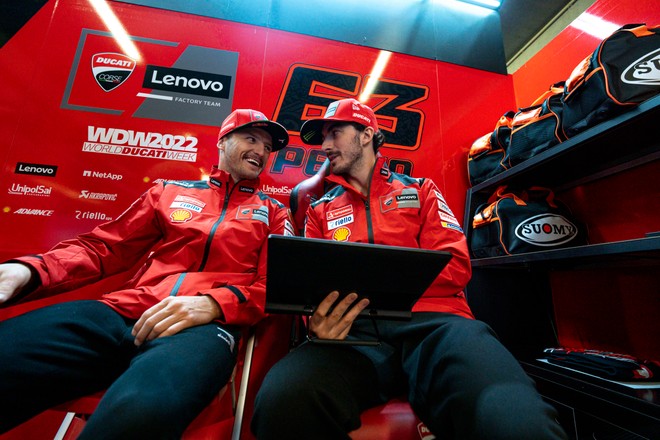 Stefano Rendina, IT Manager Ducati Corse he explained to us how Lenovo’s support was essential to speed up some internal processes and operations. “They have been redesigned foldable laptops ThinkPad X1 Fold to allow us to work easily in tablet or laptop mode in a few seconds, with the heat dissipation on the right side and with the performance suited to our needs“. The technicians use instead of ThinkPad P1 workstation to analyze the multiple data coming from the bikes at the end of a session on the track (about 15GB of data for each bike, at each “exit” on the circuit). Instead, designers can benefit from the ThinkPad P Series with which to work properly on simulations through some programs such as CAD. Many devices are then used by all staff such as i ThinkBook laptop And Yoga.

However, everything remains linked to the first innovation that allowed Ducati’s Headquarters to process and transmit data with greater speed than in the past. We talk about the HPC cluster (High-performance Computing), based on ThinkSystem SD530, SR630 and SR650 servers from Lenovoincreasing the computing capacity of the hardware systems in the company, consequently expanding the simulation possibilities in the design phase.

For a relatively small company like us, with about 60,000 road bikes a year, it is essential to be able to minimize development times on the simulator, obtaining maximum results with the least use of time and resources, already reaching a good point even before the physical construction of the components, 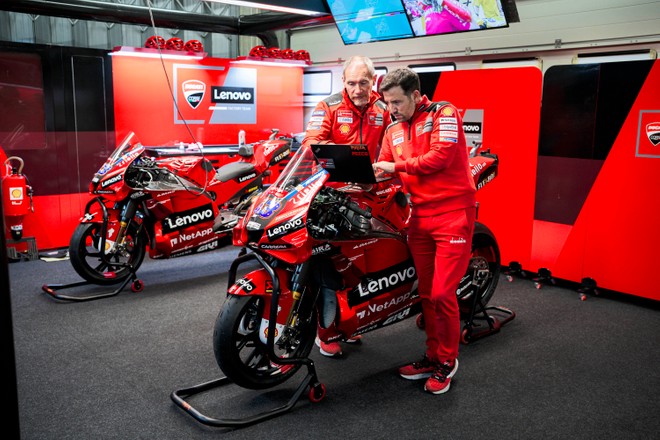 The advent of the pandemic has put everyone to the test, changing our lifestyle, our habits and certainties. In the world of motorsport, for a certain period, it was no longer possible to travel with the entire team of technicians and engineers together with the team and mechanics, thus having to communicate remotely with the headquarters. In order to be able to share in real time all the data, information and reports of the engineers it was therefore necessary to develop a tool that would allow for maximum sharing, at a distance of thousands of kilometers, with all personnel.

Thus was born in 2020 Remote Garagea project based on the small and resistant ThinkSystem SE350 edge server, more compact and easier to transport than a classic server, secure thanks to data encryption and extremely scalable. This project has allowed Ducati Corse to work in an integrated way in constant mobility, connecting all staff (often forced to work from their homes) with technicians around the world, creating over 250 2D and 3D virtual desktops, reducing the use of resources, resulting more efficient and with better track performance.

Covid has almost served as a flywheel for the development of new solutions in order to speed up research and development work but also in decision making during the race weekend. It taught us to live differently and be more efficient, even on different continents, achieving better results by working in a more sustainable and intelligent way,

A fundamental solution for a manufacturer who, in 2022, finds himself “navigating the data”, as Ducati itself explains, having to deal with information from eight bikes (each equipped with about 50 sensors), with 4 different teams and on 23 different tracks.